Book Review: Lost in Wonderland (The Twisted and the Brave, #1) by Nicky Peacock

Description From Goodreads:
Monsters, serial killers, and imaginary friends—being a Wonderlander can be murder...

Once upon a time, Kayla was lost. Then she found Wonderland, but not the one you know. Run by ex-government agents and funded by an eccentric Silicon Valley billionaire, this Wonderland is the name of a collective of highly trained vigilantes who hunt serial killers. Now Kayla, aka Mouse, works tirelessly alongside her fellow Wonderlanders, Rabbit and Cheshire, baiting dangerous murderers. But even her extensive training hasn’t prepared her for the return of her older brother…

Shilo has spent most of his life in an insane asylum, convinced his mother was abducted by a sinister Alaskan monster who lures the lost away to feast upon their flesh. And now he’s certain that his sister is in the same monster’s crosshairs. But if Shilo is going to save what’s left of his family, he’ll have to convince his sister that maybe, just maybe, we’re all a little mad.

Lost in Wonderland is the type of book that pulls you in almost immediately and doesn't let go until the very end.

While scrolling through NetGalley the other day, I happened upon this book. I'd never heard of it - or the author, for that matter - before, but the idea of a new take on Alice in Wonderland intrigued me. As did the cover. So I decided to give it a go. And now that I've finished the book? I'm glad that I did. The way the author developed this story was fantastic. She made it her own, while still paying homage to the original story throughout. That isn't an easy task to do, and yet, Peacock did it with such ease.

I wasn't sure what I was getting into in the beginning, but Lost in Wonderland ultimately proved to be a story about a family and finding yourself. As we saw with Kayla, she had to lose herself before she came into the person she felt she was meant to be all along. But it's also very much a fantastical and deadly take on Alice in Wonderland. The two shouldn't work, and yet, they do.

I adored Mouse, and I liked Shilo. Seeing how their relationship grows going forward, and seeing if their able to look past what got them to this point is going to be interesting. Both characters have their own issues - more so Shilo than Mouse - but seeing them team up together to take down the monster that led to Shilo being put into a hospital would be wonderful.

Overall, I highly recommend this book. It's on the shorter side, but Peacock has managed to tell a fully contained story arc with no problem. It's hard not to get excited about what she has planned in future installments!

View all my reviews
Posted by NicoleSometimes at 7:13 PM 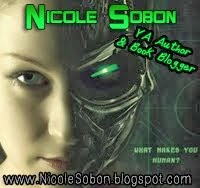